Department of Defense Grant Expands LIFT's “Operation Next” Across the Country

After recently reaching its goal of enrolling 101 soldiers in its “Operation Next” military transition program pilot, LIFT – Lightweight Innovations For Tomorrow, a Detroit-based, Department of Defense-funded applied research and development institute operated by the American Lightweight Materials Manufacturing Innovation Institute (ALMMII), announced today it received a $5 million grant to expand the program to nine additional military bases across the country over the next three years. 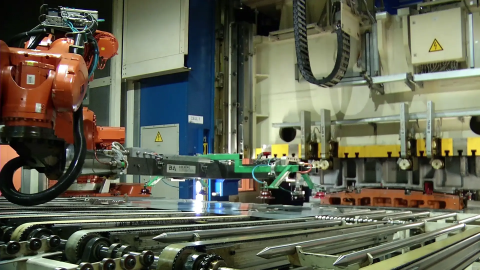 Powered by LIFT and launched as a pilot in early 2018 at Fort Campbell, Ky., Operation Next is an innovative training and credentialing program that provides a blended learning curriculum to active-duty soldiers within their last six months of service. The program enables the individual participants to earn one or more nationally portable, standards-based, industry-recognized credentials in high-demand manufacturing fields.

To date, 101 soldiers have graduated or are enrolled in the pilot – a goal chosen in honor of the 101st Airborne housed at Fort Campbell. Of the graduates, 87% have been hired into industry, while the remaining have chosen to continue their education or take time off before joining the workforce.

The Department of Defense (DoD) will fund the program’s expansion to bases nationwide, and each military facility will ramp up to support up to an additional 150 graduates preparing to separate from the military. The nine bases initially under consideration because of their large numbers of transitioning personnel. They include: Fort Bragg, N.C; Fort Benning, Ga.; Camp Pendleton, Calif.; Fort Hood, Texas; Camp LeJeune, N.C.; Scott Air Force Base, Ill.; Joint Base Lewis-McChord, Wash.; Naval Base San Diego, Calif. and; Naval Station Norfolk, Va.