Amid an enthusiastic crowd of more than 400 attendees, the Advanced Regenerative Manufacturing Institute celebrated the start of its operations during an open house at its research facility in Manchester, New Hampshire on July 28.  The BioFabUSA program looks to bridge the gap between early scientific research and later-stage product development by advancing critical technologies to enable large-scale biological manufacturing efforts. The DOD has invested in this project primarily due to its great potential to benefit warfighters who may return home with catastrophic injuries. 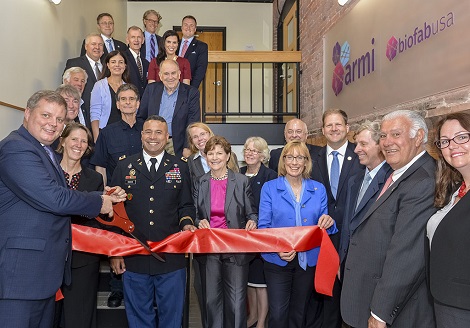 Members of the Board of Directors and the Stakeholders Council of BioFabUSA gathered for a ribbon-cutting ceremony during the grand opening of the Advanced Regenerative Manufacturing Institute's research facility in Manchester, New Hampshire on July 28.  Photo Credit: Mr. Steve Lipofsky

With many attendees traveling from across the nation, more than 25 states were represented at the historic event, and corporate participation included 60 companies primarily from the biomedical and biotechnology fields. In 2016, ARMI was awarded the BioFabUSA effort, which is a Department of Defense-sponsored initiative in the Manufacturing USA network, and the first to address biomanufacturing. This past year, the DOD awarded $80 million in funding to ARMI through BioFabUSA; industry partners, many of whom joined in the launch celebration, pledged an additional $214M.