A team of University of Massachusetts (UMass) Lowell researchers has partnered with researchers from Saint-Gobain, a multinational manufacturer of construction and high-performance materials, to create new, cost-effective sensor-laden textiles that can be used to monitor the structural health and integrity of vital infrastructures across the country, including buildings and skyscrapers, roadways, bridges, tunnels, railway tracks, dams, and pipelines.

In 2016, the American Society of Civil Engineers (ASCE) gave America’s infrastructures an overall grade of D+, indicating they urgently need major repairs and improvements to make them safe, sustainable and economically efficient. ASCE estimates a $2 trillion investment over the next decade is needed for the necessary repairs and upgrades of the country’s infrastructure.

Corrosion, one of the issues causing deterioration of infrastructure, does $13.6 billion in damage to highway bridges annually, according to the National Association of Corrosion Engineers.

From 2014 to 2017, there were nearly 4,000 railway accidents in the country. Of these, more than 430 involved derailments and close to 450 were related to railway structural failures, according to the latest report from the Federal Railroad Administration’s Office of Safety Analysis. Replacing the rails currently costs approximately $1 million to $2 million per mile.

There are more than 470 tunnels located around the U.S. and millions of miles of oil, gas, and water pipes. The American Water Works Association estimates $1 trillion will be needed over the next two decades to implement much-needed repairs and upgrades.

A Solution in Progress

An innovative solution is in development by engineering researchers at the University of Massachusetts Lowell. They are developing “sensing fabrics” that can be integrated with optical fibers and sensors and applied to existing structures to monitor early-stage strain or detect cracks. Such monitoring could minimize maintenance costs, environmental impacts, and disruptions to lives and businesses.

Optical fiber sensors are lightweight and low-cost, survivable in harsh environments, and immune to electromagnetic environments—attributes that make them highly suitable for structural health monitoring. In addition, they can provide information about structural integrity and are relatively easy to install and maintain for long-distance monitoring and assessment.

The sensors would work with a variety of materials, from concrete ties to steel rails and under ballasts. For rail systems, for example, the sensors would enable pinpointing local needs for mitigation rather than replacing full rail systems if not necessary. Researchers also anticipate that these textiles can identify early damage needing correction and avoid catastrophic failures at a later date.

AFFOA, as well as the Commonwealth of Massachusetts through the Massachusetts Manufacturing Innovation Initiative (M2I2), provided grants to University of Lowell for the research, which it is undertaking in partnership with researchers from Saint-Gobain.

Results to Date, Promise for the Future

Scientists, engineers, interns and co-ops at Saint-Gobain will be trained in this emerging technology. Training for future engineers at the undergraduate and graduate levels in civil and electrical engineering is also planned, along with workshops to educate users on the value of infrastructure sensing and system capabilities.

The development of the sensing fabrics will also create new business opportunities in manufacturing, installing, and maintenance of the fabrics as well as the processing and analysis of the sensor data.

“We envision that this Massachusetts-based R&D effort will expand the local economy by creating new products to address a critical need nationwide, as well as strengthen the technical edge of the U.S. in today’s globally competitive market.” 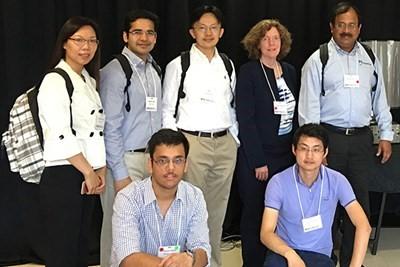 A UMass Lowell research team is working to create sensor-laden fabrics that monitor the structural health of buildings, roadways, bridges and more.

AFFOA is one of 14 Manufacturing USA institutes.  The U.S. Department of Defense established AFFOA in 2016 and continues to lead and invest in the institute.