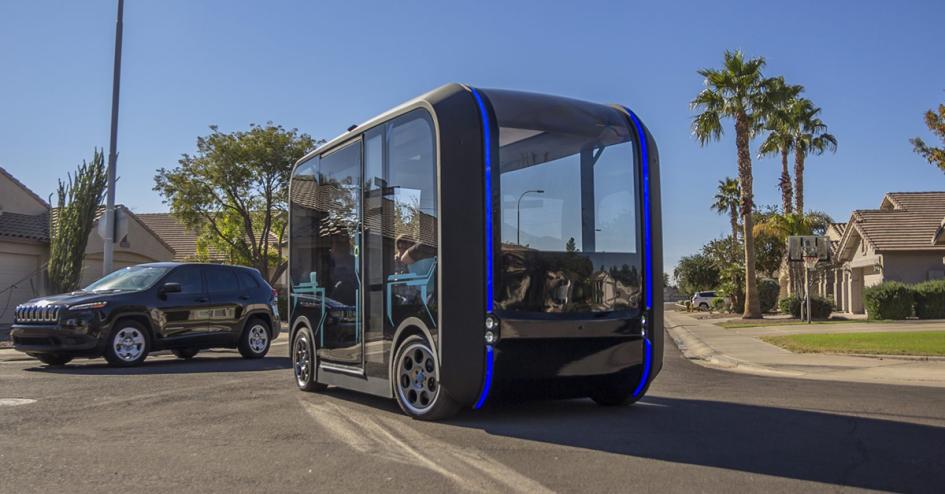 A process for the viable commercial production of 3D printed cars has arrived. Local Motors created Olli, the first 3D-printed low-speed driverless minibus, in 2016. To date, Olli vehicles have been constructed and deployed to roughly a dozen campus settings such as business parks, hospitals and universities.

Olli has about 90 percent fewer parts and a much shorter production time than traditional vehicles, thanks to a collaboration led by Local Motors and the Institute for Advanced Composite Manufacturing Innovation (IACMI).

IACMI is a manufacturing innovation institute and member of the Manufacturing USA network. Its work in improving the material options and printing processes was foundational to a new ecosystem of micro factories for vehicle manufacturing. IACMI member Techmer PM, a leading materials designer, also worked on the project.

Local Motors began commercial production of Olli 2.0 in 2019. It has a top speed of 25 mph but is designed for a top speed of about 15 mph in most settings. Running on electricity, it has a range up to 100 miles per charge and meets federal safety standards. The minibus features touchscreen interfaces and incorporates AI and voice recognition.

Local Motors began with a goal of creating low-volume micro factories to broaden production opportunities. They have improved Olli manufacturing to the point that they could be profitable building as few as 200 units a year at each location. Local Motors has built and opened microfactories in Arizona and Tennessee and plans to open a third in Europe.

Some of the most significant implications of this initiative pertain to breakthroughs in manufacturing processes. The vehicle is manufactured with 40 percent less energy and 80 percent of it is 3D printed with 100 percent recycled material. The exterior structure can be printed in nine hours. There is no production line.

3D printing also allows Local Motors to iterate quickly or change materials, which is a big advantage over traditional vehicle manufacturing production lines. The vehicle can be upgraded as technology evolves, such as when LIDAR (light as radar) sensors become ready for commercialization.

The 3D printing prowess and micro factory approach are examples of how advanced manufacturing increasingly plays a critical role in the U.S. innovation ecosystem, supporting U.S. technological competitiveness and driving product and process improvements that strengthen the U.S. economy.