In 2012, Pioneer Service CEO Aneesa Muthana lost 90% of her revenue.

One of her biggest customers bought four of her other customers. And they took all the business to China and Mexico. 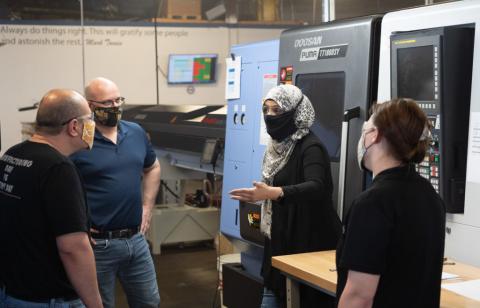 And what they were doing was digital manufacturing.

“For years I heard about CNC [computer numerical control],” Muthana said, “but I didn’t think it was a world that I wanted to be in, and we were making parts, we were making money.”

“I was OK with everyone else having all these fancy machines. I didn’t need to go into that world,” Muthana recalls thinking. “Even after the recession, we survived that. So in my mind, we were OK. I was like most manufacturers that didn’t want change. Until I lost 90% of my revenue within a six-month span.”

That’s when Muthana took action to modernize, and today Pioneer Service makes parts for the medical industry as well as the automotive, aerospace and firearm industries. Among its recent customers has been high-end automaker Tesla. But Pioneer has shifted much of its effort during the COVID-19 outbreak to make parts for ventilators and stretchers.